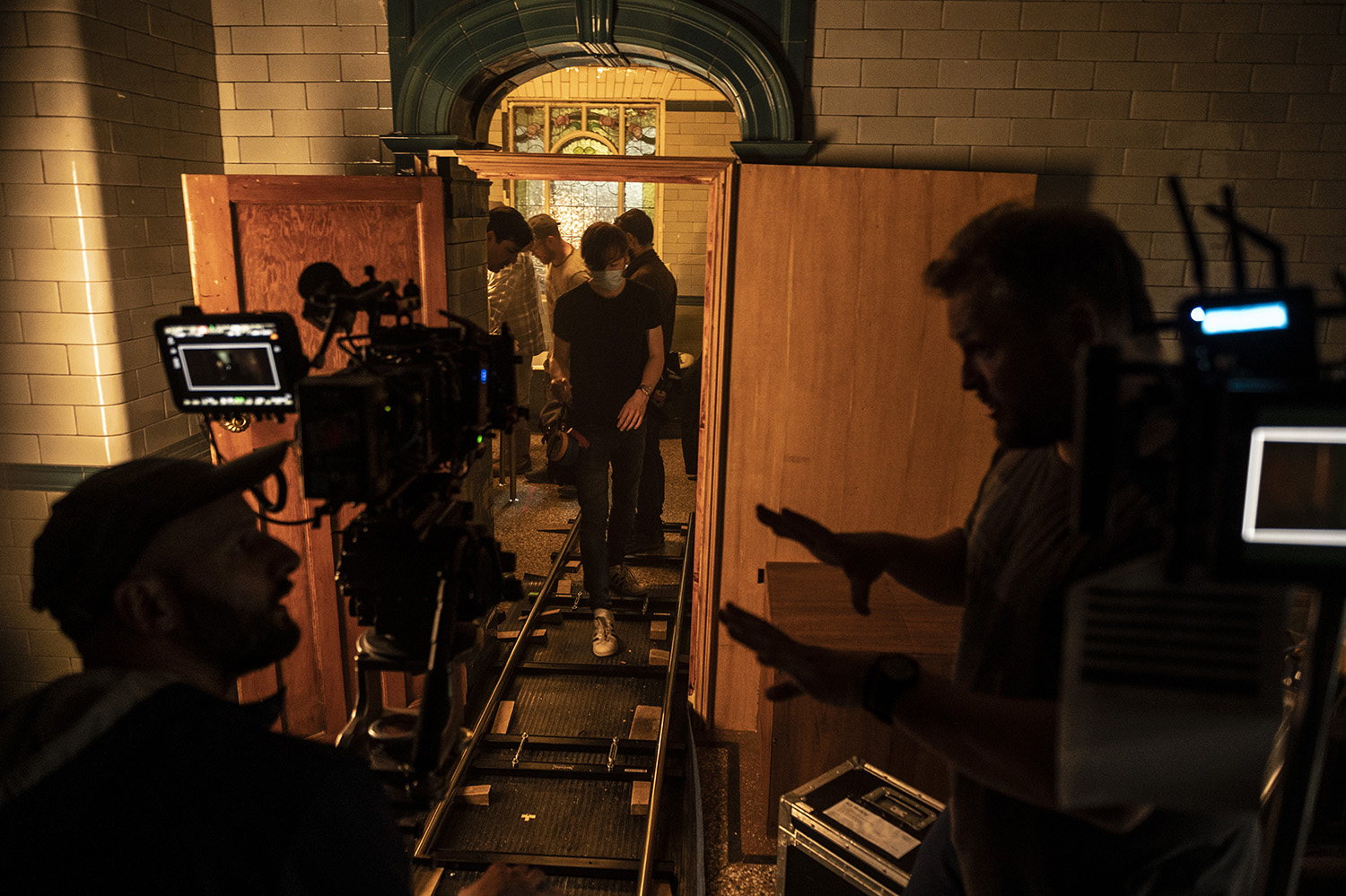 The following day was our wrap day but also our location day, Hugo and I arrived in really good spirits after the previous days stellar work. Viccy baths eventually let us in but we were already 30 mins behind due to them, as we had been shooting on sets the previous three days going back to a live location that wasn’t even pre-lit was a kick in the ass. We were doing okay but just ‘OK’ in comparison to the set build days and that be no means meant I wasn’t getting what I wanted but we had less time to play around and get off the cuff shots.

We had to deal with a one-way Covid system which took us right round the baths as well as constant masks and handwash – DIT, camera prep and makeup in the adjacent room that going all the way around to get back to the starting point.

We started with the cellar sequence. Martin and his crew installed the new creepy looking faux steel door which looked like rust but was mainly painted sand . It looked the business. The main issue with the stairwell was getting shots and moving around in them was super tricky because of the tight confines. At the bottom we had a one metre square to operate in and have Hugo place his ‘offering’. We began with as many behind the head shots as we could and with the front door we shot it with and without Hugo so we had our sequence of no activity happening in the cellar

Milda had her first stage of makeup done which was Hitchcock platinum blonde but with smeared makeup from her abduction. Then she went into makeup for her tear streaked dead look and a puttied bite mark on her neck.

We ran both cameras same as last time but makeup changes made things a little slower for us. Jack Casey was back with us for our last day as A.D. and that made things go much quicker… although we lost Hugo a few times in the maze of the facility.

Again Hugo did fantastic subtle emotional moments as he excelled in his work and provided some really powerful moments.

Whilst we were shooting cellar, Martin and his team were installing the bathroom fittings which included a toilet block, sink and mirror all in one wood piece, bathtub small cabinet and also a tungsten old fashioned lamp at the side which would work as our key-light, that combined with subtle moonlight coming in from the side window delivered by some more arri lamps gave the bathroom a very legit feel. We were also shooting the first amount of setups on a peewee dolly which was my first time using it and it gave us some beautiful track in shots when pushed along its tracks, we also got a few great boom shots which I’ve always wanted to play with as vertical tracks up and down are really difficult to achieve with any other piece of kit.

Alfred Hitchock always said he loved shooting on sets and I never understood properly until Familiar. Everything moves slower with a live location. When you have a pre-lit set you get so many setups a day, then going to a place where you haven’t pre-lit and have to be extra careful AND also have ceilings AND no removable walls to help you… everything is much slower. It also meant one or two shots I wanted to do I couldn’t pull off physically because of the restraints of the location.

That fell away as an issue though once Hugo began doing his thing. He really felt like Mason and brought this immense sense of sadness and regret to the role which was essential for the audience to empathize if not condone what he was going through., especially as he was culpable in the actions of the monster.

In order to get Hugo to spit blood into the sink we had blood capsules he would put in his mouth but only three, I knew that would never be enough. Hugo came up with the great idea of mixing them with water and injecting small amounts for him to spit time after time into our bowl of water.

The main change to the day was the deletion of the second bathroom montage scene. Him frantically cleaning and being OCD about his lifestyle worked for the first post beating scene but the second one he was beginning to rebel and it seemed superfluous but this was all academic anyway as we didn’t have enough time for both but it massively worked in our favour. We also simplified it to him cleaning clothes and ironing instead of shaving and fixing his hair. We also ditched the final check of himself fully suited up in the mirror as a hard cut to him in the subsequent bedroom scene seemed like the optimum plan.

It was so strange when we finally called for a wrap five years of my life and here we were. We packed up all our gear and in very quick time helped strip the set and get it out of there as Martin had injured his foot and needed the extra manpower.